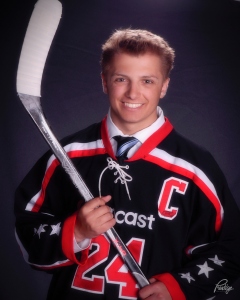 The Ebo Strong Foundation honors the legacy of Steven Eric “Ebo” Eberling. At 15 years old the bright all-star hockey player and former baseball player at Lenape High School was diagnosed with osteosarcoma (bone cancer) in his femur. During the next three years he would undergo many rounds of chemotherapy, multiple surgeries at CHOP and travel to Nidda, Germany for alternative treatment. Throughout Ebo’s ordeal he showed his true character — an unwavering positive attitude, courageous spirit and relentless determination.

While Ebo was undergoing treatment he forged ahead with school, studied and took the SATs and was admitted to Pittsburgh University. In addition, Ebo got his driver’s license and even got back on the ice as a coach of the Team Comcast AAA 2000 team. Throughout Ebo’s illness he inspired thousands of friends and neighbors, which led to the Stay Strong Ebo movement, which then became the Ebo Strong Foundation.

Ebo’s unwavering positive attitude, courageous spirit and relentless determination are the cornerstones of the Ebo Strong Foundation, a 501(c)(3).

The objectives of the Ebo Strong Foundation are: